Pip is a Python package manager for installing, upgrading, configuring, and managing project dependencies. You can use pip to find, download, and install packages from the Python Package Index (PyPI) and other package indexes.

This tutorial will show you how to install pip for Python 3 and Python 2 on Ubuntu 22.04. We'll also go over the fundamentals of installing and managing Python packages with pip.

Python is available in two flavors: Python 2 and Python 3. Python 3 is installed as part of the base system, and Python 2 can be obtained from the default Ubuntu repositories. Python 3 is recommended for users.

You should only use pip within a virtual environment. Python Virtual Environments allow you to install Python modules in a separate location for each project rather than installing them globally. You won't have to worry about affecting other Python projects this way.

Installing pip for Python 3 on Ubuntu 22.04 is a simple procedure. In your terminal, run the following commands as the root or sudo user:

The command above also installs all of the dependencies required for Python module development.
Once the installation is complete, double-check the pip version:

The version number may differ, but it will look like this:

The Ubuntu 22.04 repositories do not include Pip for Python 2. The get-pip.py script will be used to install pip for Python 2.
If Python 2 is not already installed on your system, install it by running:

To install pip for Python 2, run the script as the sudo user and use the python2 binary:

The preceding command installs pip globally. Run the command without sudo if you only want to install it for your user. The script also includes the setuptools and wheel packages required to install source distributions.
Print the pip version number to confirm the installation:

How to Use Pip

In this section, we'll go over some basic pip commands. Type: to get a list of all pip commands and options. 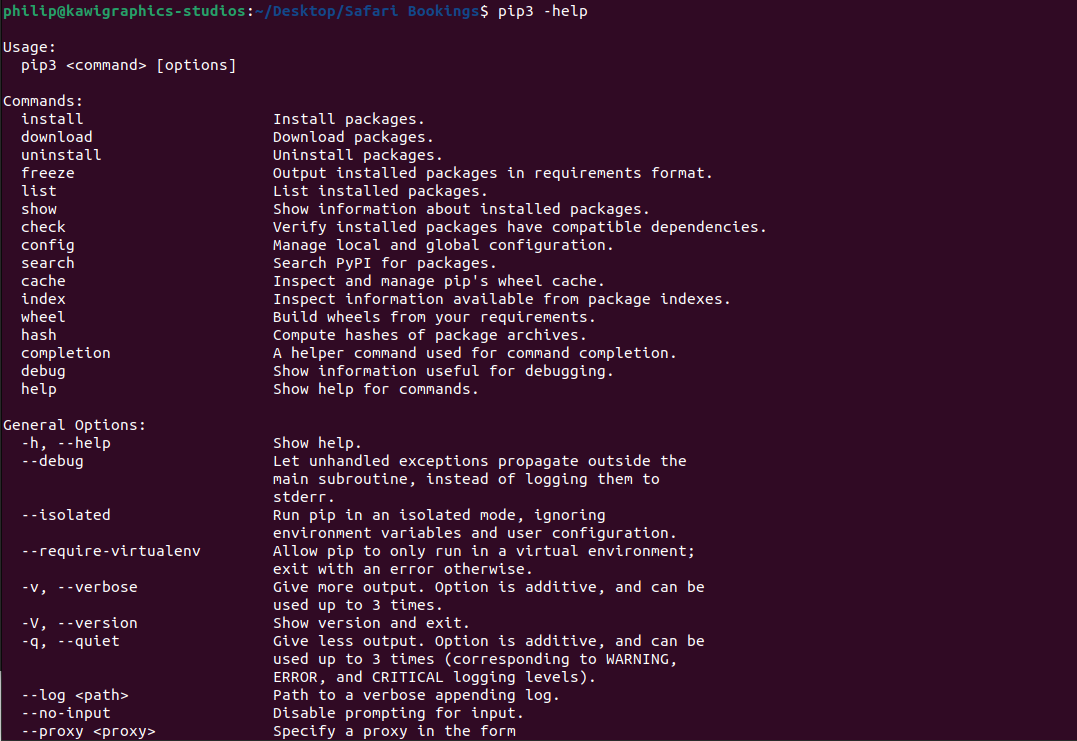 Using pip <command> --help, you can get more information about a specific command. For example, to learn more about the install command, enter:

The pip tool's most basic function is to install a package. Assume you want to install Numpy.

To install the most recent version of a package, use the following command:

To install the NumPy package, for example, type:

To install a specific version of a package, follow the package name with == and the version number:

requirement.txt is a text file that contains a list of pip packages and their versions that are required to run a particular Python project.
Use the following command to install a list of requirements specified in a file:

Upgrade a Package With Pip

To update an already installed package to the most recent version, type:

To uninstall a package, use the following command:

We demonstrated how to install pip on Ubuntu and use pip to manage Python packages. Visit the pip user guide page for more information.